Each year, NRCA awards the Annual J.A. Piper Award during its annual convention to a roofing professional who has demonstrated outstanding service to NRCA and the industry. Among the Piper Award winners are NRCA presidents and committee members—all of whom have dedicated their lives to the industry.

The award was established in 1947 and is named after former NRCA President J.A. Piper in appreciation for his service during the Great Depression. Piper had the unique challenge of holding the association together during the tumultuous time.

All NRCA members are asked to submit names for consideration for the Piper Award to NRCA's Award Committee. The committee judges nominees based on candidates' attributes, which typically include contributions to NRCA and participation in industrywide events. 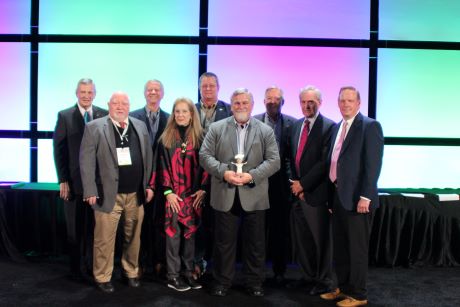 After graduating from Georgia Institute of Technology, Lancaster returned to Savannah and started working at Metalcrafts, a company founded by his father and uncles. After two cousins left the family business to start Industrial Metalworks, in 1992, Lancaster and his father and brothers negotiated with other family members to officially buy Metalcrafts. In 1997, after his father retired, he became president of Metalcrafts. Since then, the company has grown to about 55 employees. In 2020, Joseph Lancaster took over as president of the company, and Lancaster continues to work for Metalcrafts as vice president.

From 1994-95, Lancaster was a member of NRCA’s Architectural Sheet Metal and Metal Roofing Committee and served as that committee’s chairman from 2000-02. From 2004-08, he was a member of the Manual Update Committee and served as chairman from 2007-08. Lancaster also served on the Technical Education Committee in 2007, and from 2000-08, he served on the Technical Operations Committee, chairing the committee from 2006-08.

“During his term as NRCA president, he was a tremendous leader who focused on building membership and strengthening NRCA’s relationships with other organizations,” said Nelson Braddy, founder of King of Texas Roofing Co. LP, Grand Prairie, when presenting the award. “It was my pleasure to be involved in NRCA during his tenure in NRCA leadership. He was dedicated to looking out for roofing contractors’ best interests and was challenged with government overregulation during his term. At the time, a lot of new regulations had been issued—such as the cranes standard and changes to the International Green Construction Code. He was at the forefront of such issues and always sought the best ways to protect contractors any way he could and keep them informed so they were prepared and able to train their employees regarding changes.”

Lancaster also used his roofing knowledge to volunteer with the Roofing and Sheet Metal Contractors Association of Georgia, where he served on several committees. In 1993, he was elected to serve as the organization’s president.

First presented in 1948, the J.A. Piper Award is named for former NRCA President Joseph A. Piper, whose extraordinary efforts kept the association alive during the Great Depression.