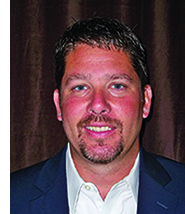 New Orleans—Nick Sabino, founder and president of Deer Park Roofing Inc., Cincinnati, has been elected 2018-19 chairman of the board-elect of the National Roofing Contractors Association (NRCA) at its 131st Annual Convention held Feb. 6-8 in New Orleans.

He holds a bachelor of science degree in mathematics from Xavier University, Cincinnati.

He will begin his one-year term as the second highest-ranking officer of one of the oldest construction trade associations in the U.S. June 1, 2018.

NRCA is one of the construction industry's most respected trade associations and the voice of roofing professionals and leading authority in the roofing industry for information, education, technology and advocacy. It represents all segments of the roofing industry, including contractors; manufacturers; distributors; architects; consultants; engineers; building owners; and city, state and government agencies. NRCA's mission is to inform and assist the roofing industry, act as its principal advocate and help members in serving their customers. NRCA continually strives to enhance every aspect of the roofing industry. For information about NRCA and its services and offerings, visit www.nrca.net.